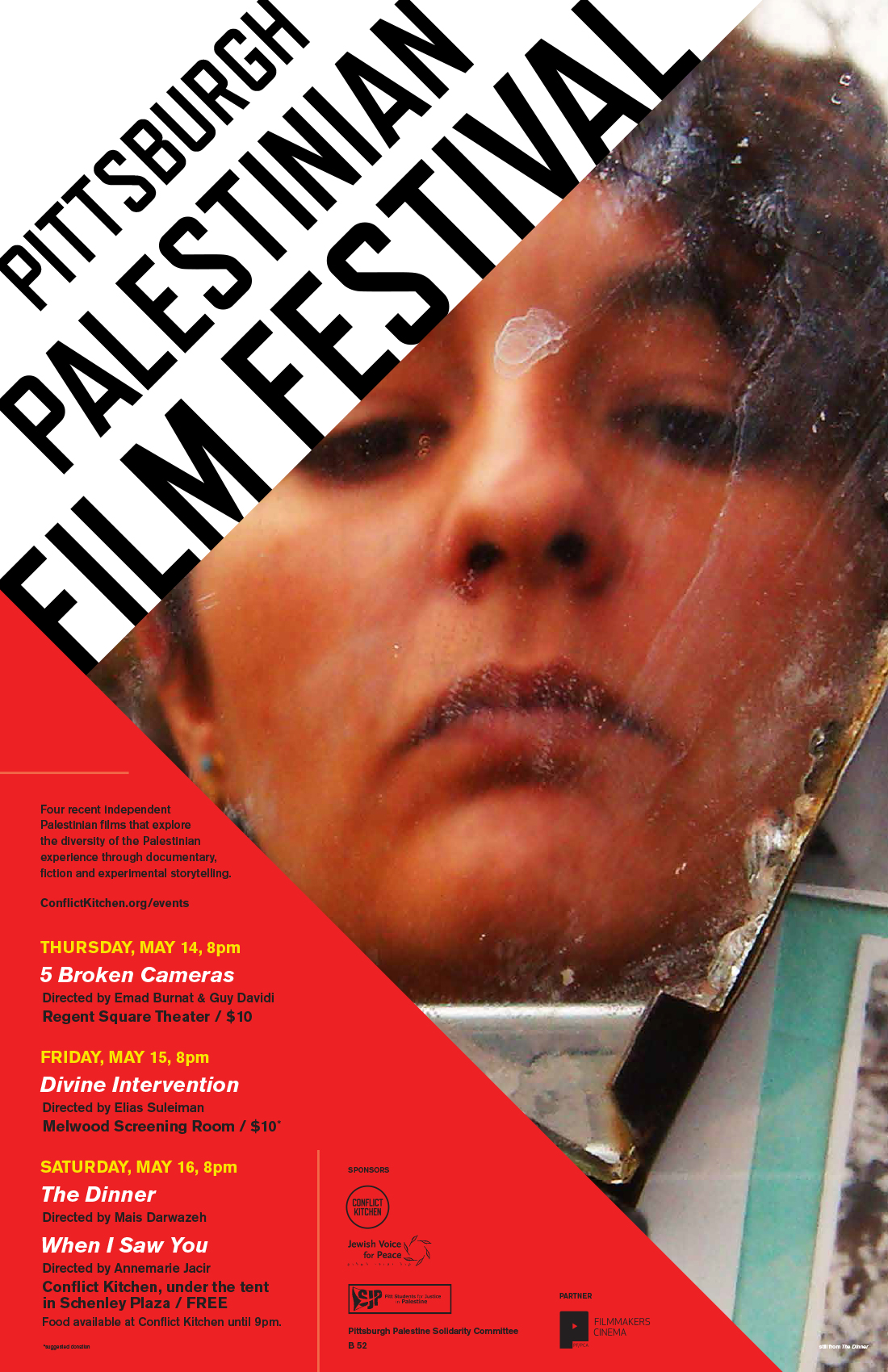 The Pittsburgh Palestinian Film Festival presents recent independent Palestinian films over a three day program, exploring the diversity of the Palestinian experience through documentary, fiction, and experimental cinematic storytelling. The festival will feature four films that offer first-hand, personal perspectives about life in Palestine and the Palestinian lived experience. The festival will culminate in Schenley Plaza with a free outdoor screening of the short The Dinner and the full-length motion picture When I Saw You.

The first-ever Palestinian film to be nominated for an Academy Award for Best Documentary Feature, 5 Broken Cameras is a deeply personal, first-hand account of life and non-violent resistance in Bil’in, a West Bank village surrounded by Israeli settlements. Shot and co-directed by Palestinian farmer Emad Burnat, who bought his first camera in 2005 to record the birth of his youngest son Gibreel, this cinematic diary follows one family’s evolution over five years of village upheaval as olive trees are bulldozed, protests intensify, and lives are lost – an unparalleled record of life in the West Bank.

A surrealistic satire chronicling the life of a Palestinian man living in Nazareth whose girlfriend lives several checkpoints away in the West Bank city of Ramallah, Divine Intervention is a series of interlocking vignettes that become “a chronicle of love and pain.” The film won the Jury Prize at the 2002 Cannes Film Festival, and Suleiman’s larger body of work places himself in the company of Buster Keaton, Jacques Tati, Jim Jarmusch, and other deadpan fabulists through his use of grim humor and visual storytelling to produce this tragic comedy.

Mais Darwazeh lives alone in Amman, a city of uprooted people, where her father tells of his memories of Palestine and people longing for places not easily remembered. She creates her own identity by gathering around her table close friends, chosen ingredients, and old recipes. A short discussion will follow this screening with director Mais Darwazeh.

When I Saw You (2012) | fiction | 98 min
Directed by Annemarie Jacir
It’s 1967 in Jordan, and tens of thousands of refugees are pouring across the border from Palestine. Having been separated from his father in the chaos of war, Tarek, 11, and his mother Ghaydaa, are amongst this
latest wave of refugees. With difficulties adjusting to life in Harir camp and a longing to be reunited with his father, Tarek sets out on a trek to find home, and on his journey, discovers a new hope emerging within his people.