CK: Tell us a little bit about yourself and your background.

Farzane: Born in 1989, I live in Tehran (capital city of Iran). Graduated from cinema faculty of Art university. I’ve done some documentary short films and I started photographing some short films of my friends. That was when I realized that I really love photography more than any art media. It’s an easier and faster way to communicate. I have a very supportive brother who bought me a camera, and I started doing a project with my family gatherings which is still going on after three years. Last year, when attending a film festival, I had to take a bus going home late night. I was so shocked with the world inside it. To spend the whole night inside a bus is indeed such an exotic way of life in which you pay to get in, get to sleep through the whole path, then you get off waiting for the same bus for a few minutes, then again you have to pay your way back to the same spot where you had started off earlier. Such a mundane repeated activity. Another long term project involved these nights started. I’m also photographing the same streets during the daylight in my free time. I’ve had an individual photo gallery and several group exhibitions at Silkroad, Mehrva, Igreg, Themine and Arte gallery.

CK: what drives your work as a photographer?

Farzane: The idea of seeing and freezing the very true everyday moments of lives and humanity is always on my mind during any of these projects. The passion to see the world through the lens, as if you are not one of the members of this world but you are just recording it, or you are not playing, but just watching it.

CK: What led you to this project?

Farzane: I’ve often looked for satisfying ideas to spend my free time after work or in the off days, carrying a camera everywhere lets you be there by all means. Sounds freaky but I do feel lost without it. Besides, this city is a source of storytelling. You actually don’t need to be any wiser than shooting the reality and narrating the truth without any manipulations. The stories are there in the bodies, looks, colors and forms. Just keep calm and shoot it!

CK: What is a typical week like for you?

Farzane: A very ordinary Saturday begins with a big cup of dark Turkish coffee, getting ready for the week. I go to the office at around 8am and I come back for lunch at 12, go there again at 2 till 4. After 4 I have my own time to rule. Between 12 and 2 having a fast snack I go to the nearby streets by foot or on bus for shooting. After 4 I have too many exciting things to spend the time with. Music, movies, galleries, friends, sports or even exploring strange recipes for cooking. Thursdays, I go to Karaj to see my dear family. Fridays though are a 24 hours free time only for me to enjoy every second of it even by oversleeping.

CK: What are your favorite Iranian dishes? What are you eating or cooking on a weekly basis?

Farzane: I adore eating with my family or friends, including my grandmother’s Kotlet and Kookoo sabzi with fresh Torshi. My mother’s Fesenjoon and Aabgoosht and desserts like Halim and Kaachi. My ex’s mother’s Koofte Tabrizi with homemade yoghourt (I don’t have the chance to try it again, one of the reasons I regret not being in that relationship anymore :D). On my own I don’t have the facilities and time to make such desirable dishes, any king of sandwiches with vegetables, meat, chicken, fish or a soup that can be done in minutes by anything available in the refrigerator. I also make different cocktails with Iranian herbs mostly with mixing mints, lemon and honey or cumin seed with figs! 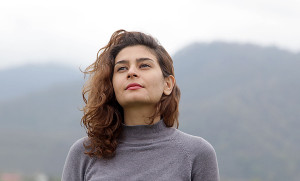