Where: The Waffle Shop (next to Conflict Kitchen) 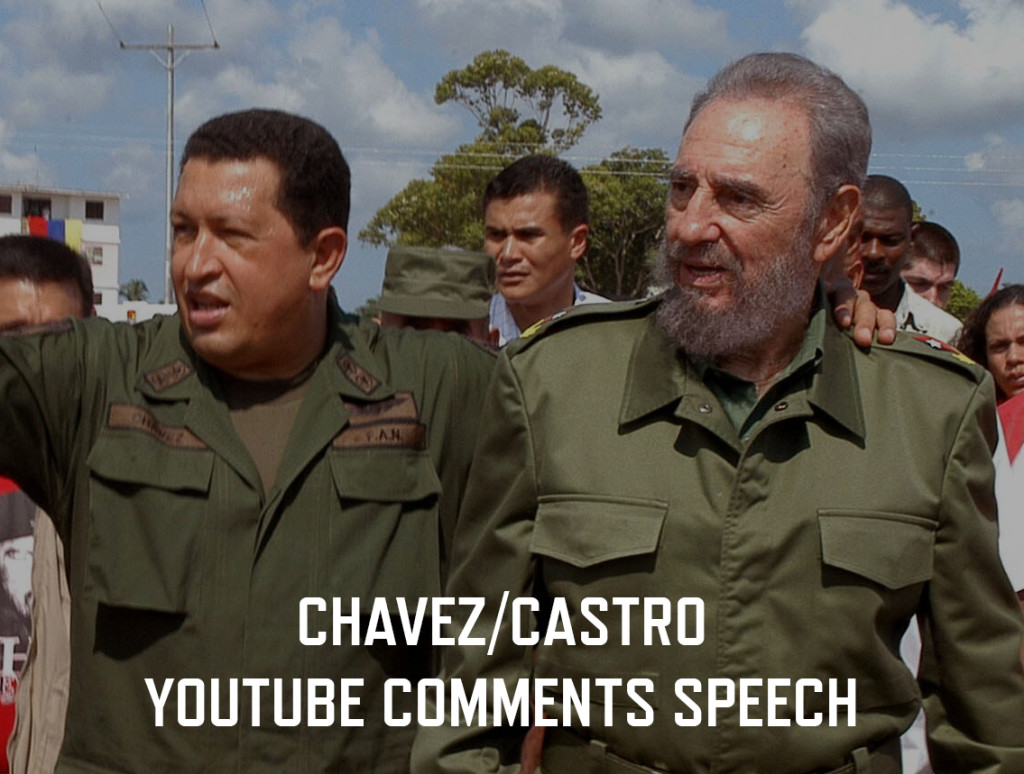 We selected comments (posted on YouTube) to famous speeches by Hugo Chavez and Fidel Castro and edited them into first person scripts that were performed by an actor (Alexi Morrissey) who first portrayed Chavez and then transformed into Castro. The speeches are included here:

The only reason why most of you even know about me or Venezuela is because of oil! The oil belongs to those who are strong enough to exploit this natural resource. Why, in Venezuela, aren’t we the most advanced country? With all the oil money, we should have a vibrant economy with industry other than oil. It is not happening because I am investing in armaments, instead of using it wisely. There are great reforms in Venezuela: health-care, schools, and land for the poor common people! People say to me: Congratulations, Hugo! I AM YOUR ADMIRER! FIGHT THE DEVILS AND DRACULAS OF THE MEDIEVAL PIRATE SOCIETY IN WEST!

My critics are weak on specifics, but strong in venom, voiced with all the ferocity of those who fear that their class advantage is under siege because others, below them on the social ladder, are now getting a slightly larger piece of the pie. I am a dummy puppet faking antagonism to my puppeteers. I am another “Salvador Allende” and need to be replaced by another “Augusto Pinochet”.

We are a danger to the world…wait, am I nuts?!  Why do I say that? How many times has Venezuela invaded a country. Never, right?! Venezuela is Democratic, not Communist. Socialismo no es comunismo. Despite the United States trying its best not to have me reelected, Venezuela democratically elected me to office. Pick up a history book, and find out what happens to democratically elected leaders that have their country’s best interest at heart.  If you want to know the truth, destroy your TV, and travel to Venezuela.  It seems easy to say “Viva Chavez” when you are sitting pretty in the United States., but maybe I should buy you a one way ticket, so you can live here and enjoy a country deteriorating under your feet. It would be my pleasure to give you a tour and open your eyes… warning, bring your own Kevlar vest. Last weekend in my town, there were thirty different assault deaths. I am the real devil, and I live in Caracas, Venezuela, formerly the capital of heaven.

I am called the devil, which was part of Bush’s holier-than-thou load of crap.  I am the best thing that has happened to the region since Simon and Che…oh, that’s right, YOU killed Che! I am the new Malcolm X! As a pupil of Dr. Fidel Castro, I will never give my compatriots a better future, I will only provide them misery. If you doubt this, look at Cuba after forty-seven years.  I must differentiate myself from other lame sellout leaders and associate myself with revolution. I definitely need a symbolic revolutionary dress or something, like a Mao cap, or bandana, or maybe a Kalashnikov… something.

I have been an advocate for my people and stood up to American hegemony and imperialism.That is why my approval rating is 5 times that of any ‘democratic‘ leaders in the west. I don’t tolerate political opposition and that turns me into a closed-minded man who doesn’t deserve to rule a beautiful country like Venezuela. Freedom of press? The dirty laundry Americans hear all day? Freedom to_ bear arms? People shooting each other? Freedom to vote? C’mon, a rigged election with Bush vs. Gore? Free market? Yeah, you Americans are really privileged with your freedoms. I can’t believe people died for this Bull Shit. Actually, if you knew anything about Venezuela you’d know that I allow 100% opposition. There are many anti-Chavez newspapers in Venezuela, If you mean: Do I accept verbal and racial abuse; does Obama? No, he doesn’t.

From now on, I’m your FUCKIN HERO! No president in the world has bigger BALLS than me. My candor cheapens my status as a leader, and you want to make me a hero? I am just another blabbing, quick-witted, slightly educated politician who hates America.

I do not hate America; I hate American politics. The US Government is facing a revolt from we Latin American countries who have regained moral superiority and thus our voice. I, at least, care for my people – not just the wealthy bankers. I am restoring meaning to the pathetic sham that politics has become. You know what’s so funny about this? People say that the CIA is paying me off to say all these bad things about the U.S., because after so many threats the U.S. will invade Venezuela. Then, I will fake my death, the U.S. will keep Venezuela’s oil, and I will have plastic surgery and live the rest of my days on a Caribbean island.

(walk onto stage and get everyone to start clapping their hands with you, a quick, fast-paced rhythm to welcome you)

Cubans come to your prosperous land from a land suffering the cruel U.S. blockade. Your prosperity is about to end, unless the Occupy movement can replace your obsolete economic system, your government, and mainstream media with institutions that actually serve the public.  And why are these lands prosperous? Because there is no Communism in the U.S.  Even still, I am willing to give everything to the commune.  And the thing is: I don’t have to. We all have our homes. And remember this: I’ve given half of my salary to welfare programs to help those who can’t, and don’t, work.

China is State-Capitalist. The people have no freedoms, and only the state has property. Capitalism is also slave labor.  And the class difference is against everything Communism stands for.  Communism doesn’t work? DUDE, the world’s next superpower will be China, a one-party communist state.  I RULE CUBA.I know what kind of hells those State-Capitalist / State-Sociali­st / Stalinist / Jucheist / Castrois­t / Maoist / Totalitarian nations are like.  Actually, they, and we, are not Communists. Do you want to know why the number of Communists has fallen? Anti-Communism, propaganda, cartoons, McCarthy. Without people thinking of the USSR, Cuba and North Korea as Communist, many more people would actually be Communists.  They have grown by using capitalistic principles and cheap slave labor.

All you need is a home and car – basic property – NOT enterprise.  Are you willing to give up your home, car and money for the sake of the community?  Even to those people that just don’t wanna to work?  Why would you do that?  GO TO SCHOOL, GET A JOB, AND STOP COMPLAINING about a country that half of the world wants to move in to.  Wait, I mean: go to school and get a job? Where have you been?!? Go to school and get into HUGE debt that will last nearly all of one’s whole working lifetime; get a job in a country where the giant corporations have moved nearly all manufacturing to other countries with no unions and pitifully low wages? Private enterprise should be illegal, and everything should be made public. That doesn’t mean that you can’t still own a car and a house. And no worries of money; money is useless in Communism. The public would provide you everything you need.

I have a reason to praise Communism; I am still making millions out if of it. What millions? (changing his mind, assertively)  Have you ever been to Cuba? Do you handle my finances? Do you have proof? I live in a place called “Ground Zero” in Cuba: servants, a personal farm cultivated by slaves, luxury cars for my sons; personal bodyguards; a modern hospital –  just for me.

I expect reactionaries and ignoramuses to bemoan me, Communism, the Cuban revolution and what it signifies. But it’s interesting how many liberals get really worked up by me. Some of the liberals actually emigrate to the U.S. by choice, into the belly of the beast, to a country that has the most degenerate, anti-socialist domestic and foreign policy, who befriends the worst kinds of dictators and tyrants.

In Cuba, there are 11 millions slaves that work for me, their bearded millionaire hero.  The rest of the world doesn’t realize who their real enemy is – people like you Americans.  Why don’t all of you try out Communism, move to Cuba, and live there like the regular people.  After 6 months, you will come back here to the U.S. in an inner-tube or a wooden raft. I feel sorry for people like you, ignorant at the fact that you are slaves to your system, and poor Cuba is suffering because of the U.S. embargo.  I believe that Communism as practiced today will not last more than 20 years. People are fed up with it, and the Internet is the only thing that will change the world.

Unfortunately, free territory is gone.  It just didn’t work.  Free territory did work, as I’ve said many times. Why are people fed up with Communism? Th-ey DON’T even KNOW  what it IS!?  Especially with the media’s perception of North Korea. People are too lazy to research, and that’s why they don’t know the true meaning of Communism.  Most democratic countries do last. The best places to live are democratic countries with social medicine. Most of the countries in Europe have this type of system. But Communism failed. FAILED. Go on, Communist dreamers. Indulge in your dreams!  Dream of Capitalism as found in Somalia; isn’t it a wonderful place? But even the Communism of Karl Marx and his friend, I forgot his name , would never have worked. They thought that there would be a time when not even the police would be needed. It’s like that famous John Lennon song: “You may say I am dreamer, but I am not the only one.”

I don’t care what anyone says about me.  I’m right about the U.S., and after all, aren’t I a very smart man? Blah blah blah, my typical resentments against the rich and and powerful U.S. After all, I’m an ignorant fool, and I’m just blinded by the U.S. capitalist success.  If only you would give Communism a chance.  In the Soviet Union, it’s gone because of a massive army.  It worked economically and socially, until Lenin assaulted them. Lenin invented his own form of Communism just like Mao, Me and now Chavez. But it all has the same roots. They all wanted to stay in power as long as possible.  And Communism has never failed; it’s never been fully there. Free territory didn’t fail; it was destroyed. Please, you go live in a Communist country, and then talk to me. You decide.