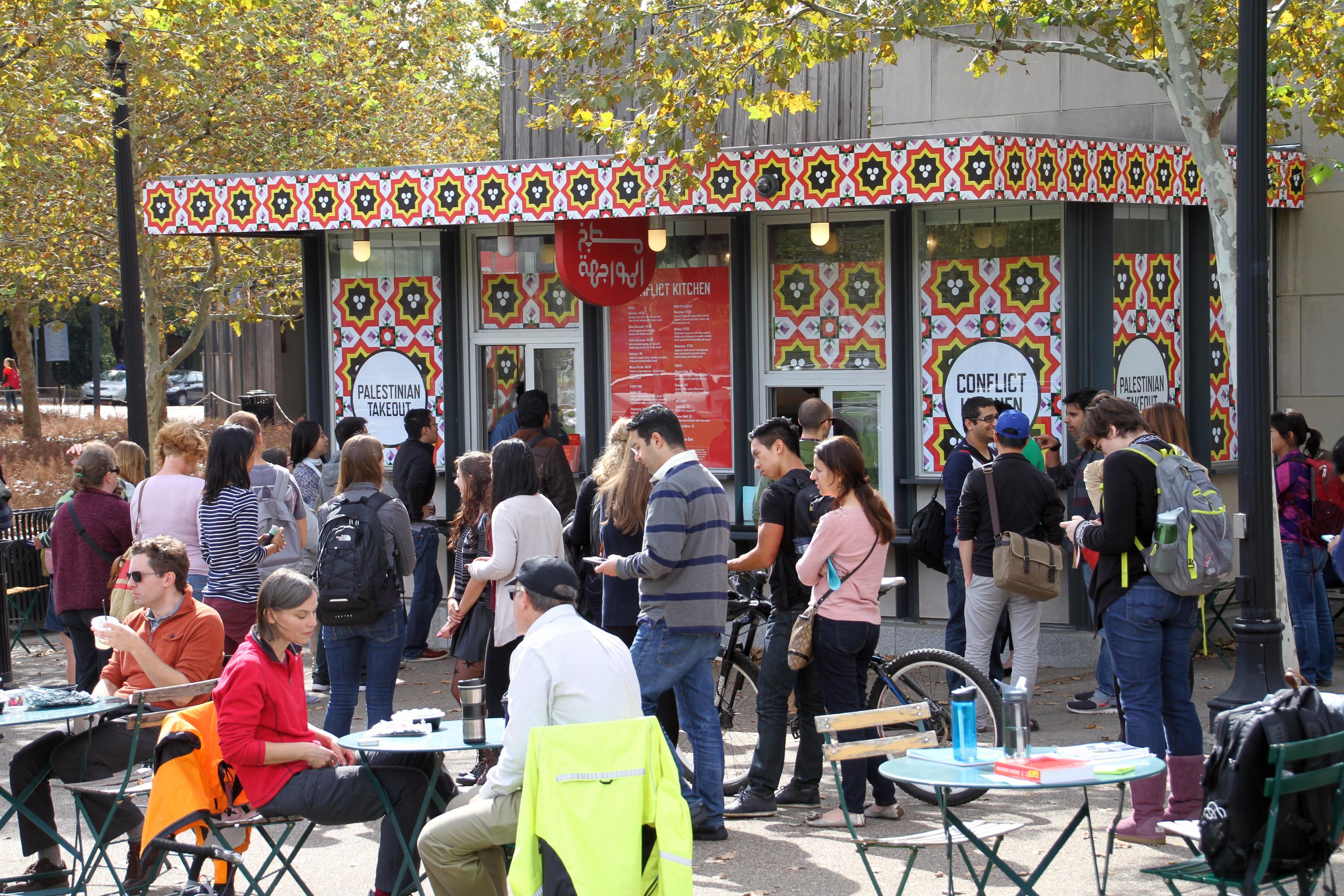 Post-Gazette writer Melissa McCart approached Conflict Kitchen with a set of questions of which were to be included in this article, published November 6, 2014.  Unfortunately, Ms. McCart neglected to include any of Conflict Kitchen’s answers.  Additionally, we specifically requested that Ms. McCart include the viewpoints of local Palestinians in this article, as well as her initial article on Conflict Kitchen’s Palestinian version. In both cases, she interviewed and did not include these very important voices.

Below are our responses to several of Ms. McCart’s questions to us, as well as statements made in the article.

CK: The Heinz Endowments has publicly made a statement to B’nai B’rith International disavowing their support for our current Palestinian version of the project.  A press release posted by B’nai B’rith on their websites claims that The Heinz Endowments stated that this iteration of Conflict Kitchen “appears to be terribly at odds with [Heinz’s] mission of promoting understanding.”

Protecting freedom of expression from the influence of biased media and powerful political and lobbying groups is essential for the cultural and political health of a democratic society.  We are extremely upset that one of Pittsburgh’s most important arts and culture funders would disavow their grant to us when seemingly pressured by strong outside forces.

MM: Has you programming been shaped by the accusations? If so, how?

CK: Conflict Kitchen’s goal is to increase the curiosity and understanding about the people who live in countries our government is in conflict with by directly exposing our customers to these cultures and viewpoints. Another goal is to raise the public profile of the minority Afghan, Iranian, Cuban, Venezuelan, and Palestinian communities who live and work in our region, thereby creating a more accurate depiction of Pittsburgh’s cultural diversity. These new accusations will not alter Conflict Kitchen’s goals with our current Palestinian version.  Rather, they strengthen why our mission to increase curiosity and understanding is more important than ever before.

MM: And is your work serving its purpose in giving voice to Palestinians? Or has it surpassed your expectations?

CK: Yes, our customers have been incredibly interested in our food and the Palestinian viewpoints expressed in our printed materials and events, responding with sincere and thoughtful questions.

MM: When I went to the dinner, it was mentioned that Conflict Kitchen is feeding 300 to 400 people a day. Are you still feeding this many people a day? Is it more than any other country you’ve featured?

CK: The real story on our Palestinian version is that it is the most popular iteration to date, with 300-400 people a day coming to the restaurant.  Our public is approaching us with trust, support, and open minds.

Responses to Pittsburgh Post-Gazette’s article and The Heinz Endowment’s statements:

Post-Gazette: John M. Ellis, senior director of communications with the Heinz Endowments, said, “There is another major issue at stake here concerning the rights of arts organizations to perform edgy and provocative programming. … That, in many ways, is the role of the arts, and while we may not always agree with the positions and opinions they express, we do support their right to express them.”

Conflict Kitchen: In a letter responding to B’nai B’rith, The Heinz Endowments President Grant Oliphant wrote: “I want to be especially clear that its current program on Palestine was not funded by the endowments and we would not fund such a program, precisely because it appears to be terribly at odds with the mission of promoting understanding.”  Oliphant also wrote that “[the Endowments] emphatically does not agree with or support either the anti-Israel sentiments quoted on Conflict Kitchen’s food wrappers or the program’s refusal to incorporate Israeli or Jewish voices in its material.”

The Heinz Endowments cannot have it both ways.

Post-Gazette: John M. Ellis, senior director of communications with the Heinz Endowments states, “The grant was made to assist in the restaurant’s relocation from East Liberty to Schenley Plaza in Oakland.” Heinz Endowments president Grant Oliphant stated, “I want to be especially clear that its current program on Palestine was not funded by the endowments,”

Conflict Kitchen: The grant made to us was, as stated in the grant agreement, “To support Conflict Kitchen’s new programming and development at its new location in Schenley Plaza.”

Post-Gazette: “Each restaurant to-go order is wrapped in packaging designed with text from interviews with Palestinians living in the U.S. and Gaza.”

Conflict Kitchen: Palestine interviews, as stated on the wrapper, were conducted with Palestinians living in both Palestine and the U.S.” This includes both the West Bank and Gaza.

Post-Gazette: “One section homes in on what the restaurant identified as a Pennsylvania-based business.”